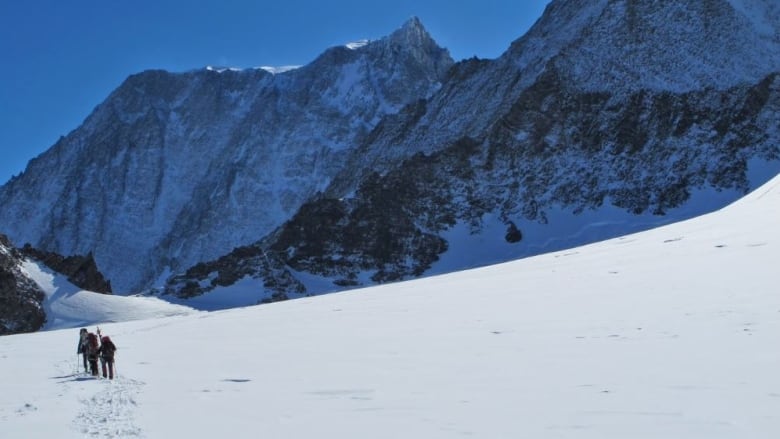 As a flight service specialist, Teresa Griffith monitors weather conditions from her office in Leduc, south of Edmonton.

But this week, she's trekking through snow and wind in Canada's North.

The group of 14 women, along with guides and support staff, are snowshoeing 100 kilometres through Akshayuk Pass, a natural corridor cutting through mountains and ice.

They're hauling 60 pounds on sleds and carrying another 20 pounds in their backpacks.

"I love a good adventure," said Griffith, who once captained a York boat along the Peace River for three-weeks and snowshoed five days a week when she lived in the Northwest Territories.

During her Christmas break she read about the Akshayuk Pass in a copy of Explore Magazine.

The next week an issue came in the mail containing an ad for a trip to the Arctic with True Patriot Love, an organization that sends military members and civilians on trips together to raise money for veterans training for new careers.

Griffith signed up and began fundraising the $50,000, her portion of the group's $1 million goal.

The next month, she flew to Hamilton to begin training for the adventure.

Teresa Griffith stands with her teammates on a training camp in Hamilton last January to prepare for their expedition to Baffin Island. (True Patriot Love)

There she discovered not everyone had the same amount of wilderness experience.

For some of the women, this would be their first camping trip.

"We had to practise putting up our tents and sleeping outdoors because some of the ladies had never done that," she said.

But for others, this is yet another expedition.

Kathryn Logan, a Lieutenant Commander in the Royal Canadian Navy, is part of the team.

"When I was deployed in the past, it's always 'Canada says go so I go,' but many of the practical aspects are the same," she said. "Do I have everything I need? Am I going to starve? What could I bring to make myself more comfortable?"

Logan has been deployed on a Navy warship in the Arabian sea, served a tour in Afghanistan and another in Libya.

But this trip will come as a shock to the system, Logan said.

"Coming from Victoria where I'm currently in the sunshine and wearing a T-shirt, I think I will have the biggest weather shock because I haven't had that -30 C weather in a while, so the Ontario folks might have an acclimatizing edge on me," she said.

"But I think it'll be great for the military people and the civilian participants to get everybody out of their comfort zone."

Bonding through adversity
Griffith and Logan have been paired together to mentor one another.

The two were matched up through a personality test.

Griffith will help Logan learn about the business world and Logan will help Griffith during the expedition.

"[It's about] bonding through adversity," Griffith said. "In many cases on this expedition the military members have the expertise so they mentor the civilians on the trip and then after we bond and become friends, then we mentor them to transition back into civilian life."

At 36, Logan is approaching retirement age from her military career.

She had enrolled in the Royal Military College of Canada at age 17.

"I was just looking for something different and the idea of a challenge. I think my 17-year-old self was just like, 'Oh yeah cool, a university that will make me do push ups,'" she said.

Soon Logan, as she puts it, will have to decide what she wants to do when she grows up.

"I hope that I can expose some of the civilian women to what military women live with in our jobs and we can hopefully learn from each other," Logan said.

"There's something to be said for going through a bit of hardship with people; living in close proximity in tiny six-man tents in freezing Arctic.

"I think that will definitely make us closer." 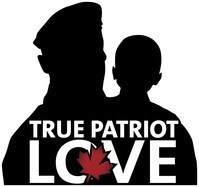 TORONTO, April 26, 2019 /CNW/ - On April 1st, a group of business leaders joined together with ill and injured military Veterans from across Canada for a 14-day, 100 km all-women expedition in Baffin Island, Nunavut. 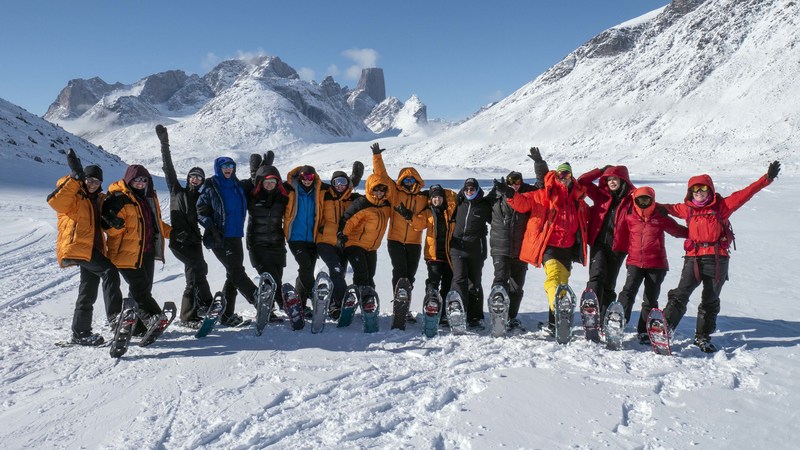 The team's objective was to raise funds for military and Veteran families through True Patriot Love Foundation, a national charity dedicated to providing essential support and resources to the military community, including serving members, Veterans and their families. The adventure wrapped up on April 14 and is close to reaching the $1 million fundraising goal. Past expeditions have collectively raised $7.5 million for the cause.

Funds raised will be used to help address the unique challenges faced by military and Veteran families resulting from service, including mental health, physical rehabilitation, transitioning to civilian life, and the special needs of children.

Previous expeditions have ventured to the Himalayas, the North Pole and Antarctica, but this is the first journey to Baffin Island, and the first women's expedition. True Patriot Love's expeditions highlight the perseverance and unconquerable spirit of military members and Veterans in the face of adversity. The all-women expedition to Baffin Island was conceptualized to showcase and celebrate female strength and resilience, and bring added focus to the challenges that women face in both the military and business workforces. The expedition also includes a mentorship component where business leaders offer one-on-one support to military participants as they transition to civilian careers.

Participants were tested both physically and mentally amid the Arctic landscape, which included whiteout conditions with low visibility on some days, and temperatures that dipped to -40 C. Completing the journey left many of the participants with a fresh perspective and newfound purpose.

"I'm so grateful for having had the opportunity to participate in this challenging but rewarding adventure with such a remarkable group of women- it's something I'll never forget," said Libby McCready, Vice-President, Training and Development, Mackenzie Investments. "It was such a rewarding experience, both in terms of being able to test our limits and raise money for such an important cause. The strong bonds that were created on this expedition will last a lifetime."

For Kathryn Logan, a Lieutenant Commander in the Canadian Armed Forces, the expedition left a lasting mark. "True Patriot Love's Baffin Island trip was an incredible experience for me as an injured service member," says Logan. "Having the opportunity to take in the raw beauty of Canada's North with so many amazing women was inspiring and empowering. I greatly appreciated the opportunity to visit Nunavut and I look forward to the mentorship and support from my Baffin Island sisters as I approach the transition from military to civilian life. I thank the other participants and True Patriot Love for an experience I will treasure for the rest of my life."

Laura Hearn, True Patriot Love Foundation's VP of Corporate Partnerships, Events & Marketing also joined the Baffin Island expedition as a participant. "The expedition was an unforgettable experience and a true demonstration of what can be accomplished when a dedicated group of people come together to take on a difficult task," she says. "It was an honour to share this experience with such an incredible team of women from the military and business worlds and to continue shining a light on our important work of supporting the military community."

True Patriot Love is grateful for the sponsors of this year's expedition, including presenting sponsor Mackenzie Investments and platinum sponsor Scotiabank.

True Patriot Love Foundation (TPL) is a national charity dedicated to providing Canadian military and Veteran families with the support they need and the hope they deserve. Since 2009, TPL has provided $25 million to fund innovative research and support 750 community-based programs across the country. By addressing the unique challenges resulting from military service including mental health, physical rehabilitation, transitioning to civilian life, and the special needs of children, TPL has helped change the lives of more than 25,000 military families.

With women making up only 15% of the Canadian Armed Forces, True Patriot Love is committed to supporting programs that address the unique needs of female military members, Veterans and their families. Through the Captain Nichola Goddard Fund, True Patriot Love provides national funding to directly benefit community programs that support servicewomen, female Veterans, and their families. The Fund was established in memory of Captain Nichola Goddard, the first female Canadian soldier to die in a combat role.

The True Patriot Love Expedition: Northwest Territories 2020 will bring together members of the Canadian Armed Forces and Veterans with Canadian business leaders for a challenging 13-day journey. Working together, they’ll hone their leadership and self-development skills and venture to Canada’s North for a once-in-a-lifetime canoeing experience on the iconic Keele River, where the team will travel through the majestic and stunning Mackenzie Mountains of the Northwest Territories.

In addition to white water canoeing through the breathtaking foothills of the Mackenzie Mountains, the expedition team will raise critical funds for True Patriot Love Foundation to support military members, Veterans and families across Canada.

We are currently seeking committed business and community leaders to join this incredible journey as part of the True Patriot Love 2020 expedition team. For more information about the itinerary and why you should join us, click here.

If you are interested in becoming an expedition sponsor, please reach out to Saj Rahman, Director of Corporate Partnerships & Sales at srahman@truepatriotlove.com. 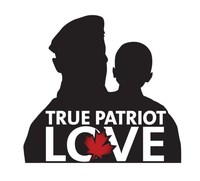