Many participants 'did not recognize In Flanders Fields,' notes the report

https://i.cbc.ca/1.4824181.1536946299!/cpImage/httpImage/image.jpg_gen/derivatives/16x9_780/remembrance-day-20171111.jpg
A man touches the helmet on the Tomb of the Unknown Soldier after laying a poppy following the National Remembrance Day Ceremony at the National War Memorial in Ottawa on Saturday, Nov. 11, 2017. Veterans Affairs plans to launch a new campaign ahead of this year's ceremony. (Justin Tang/The Canadian Press)

Veterans Affairs plans to launch a new ad ahead of Remembrance Day 2018, but it has struggled to craft a campaign that doesn't make people "feel guilty" or come off as a recruitment pitch, according to the in-house testing results.

The department hired Sage Research Corporation for $62,969 to run ad campaign concepts past some focus groups earlier this year to help choose a new campaign to launch in the lead up to Remembrance Day.

The new ad is supposed to act as "a centrepiece" for the 2018 commemorations, notes the firm's analysis, which was recently posted online.

"As this is a new campaign, it is critical that the department ensure that the ad campaign will resonate with intended audiences," says the report's preamble.

The research firm showed three 30-second ads to participants, titled "The Torch," "Step up," and "Our Freedom."

"The Torch" cuts between scenes of people laying poppies on a cenotaph and close-ups of faces, while a verse from the war poemIn Flanders Fields is read aloud in sombre tones. 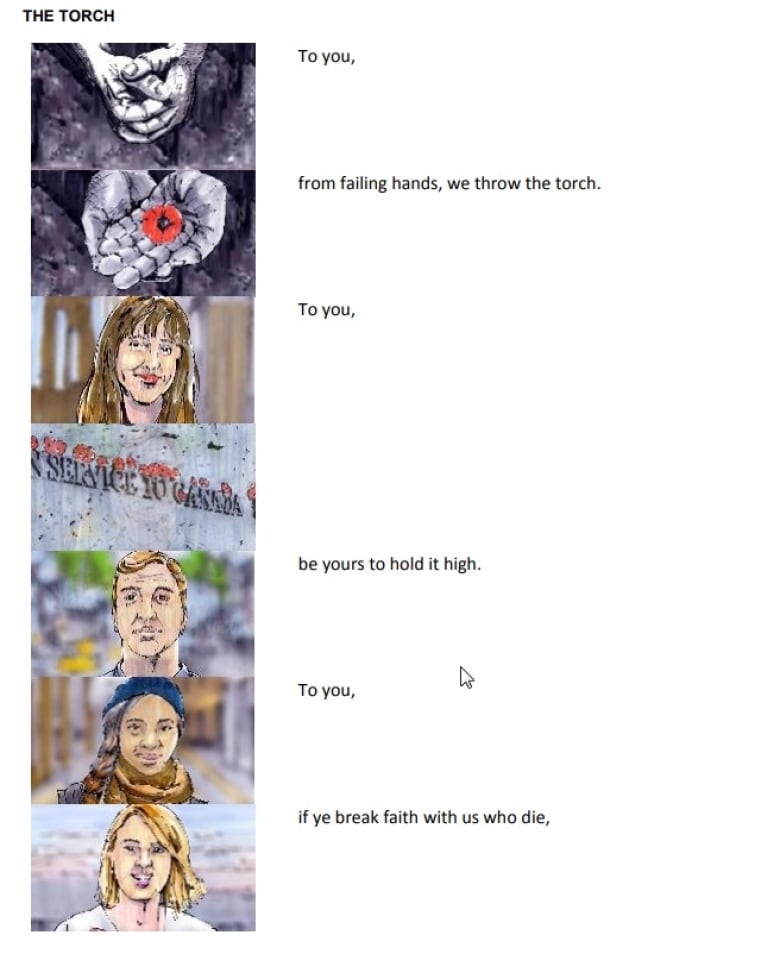 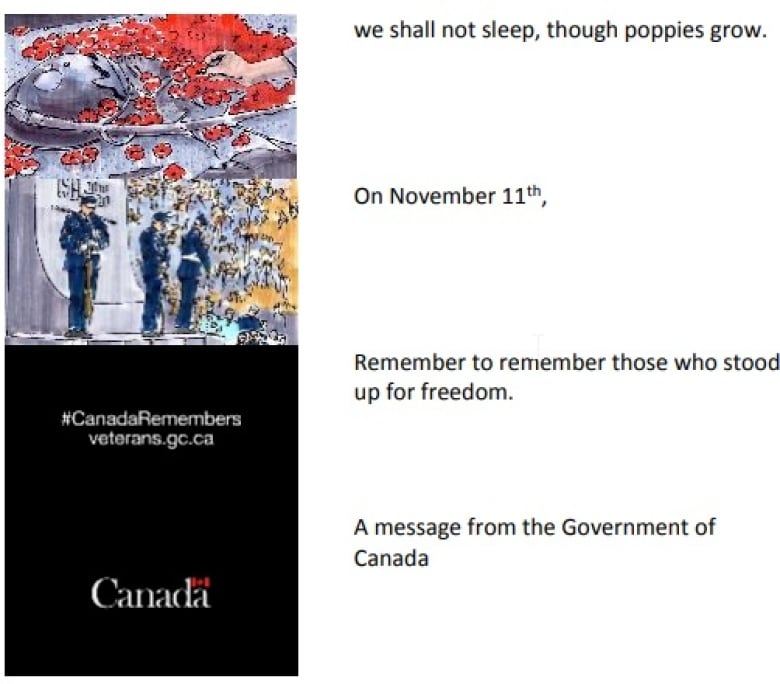 While it packed an emotional wallop for those who know John McCrae's 1915 poem, "at least half the participants in the English sessions did not recognize In Flanders Fields, nor did any of the Montreal participants."

"Some participants said that the ad made them feel guilty, which they found off-putting," read Sage's analysis.

The "Step up" ad, meanwhile, didn't play well with participants in the age 18-34 bracket. That ad campaign uses close-up images of veterans from the two world wars and more recent conflicts and urges Canadians to "step up" and remember veterans.

But many of the focus group participants had a problem with one line in the ad script: "We owe them everything we have as Canadians."

"There was a strong feeling that this was an overstatement: that is, unquestionably we owe veterans a great deal but not 'everything' – there have been many other forces at play that make Canada what it is today," the researchers wrote.

Some participants, they added, "perceived the ad to be more of a recruiting ad than an ad about remembrance."

The focus groups also criticized the ad for under-representing women in uniform.

A third ad —"Our Freedom" — showcased Canadians expressing gratitude for modern freedoms ("Thanks to them, I am free. Free to say what needs to be said") and ended with an plea to "remember those who fought for freedom" on Nov. 11. 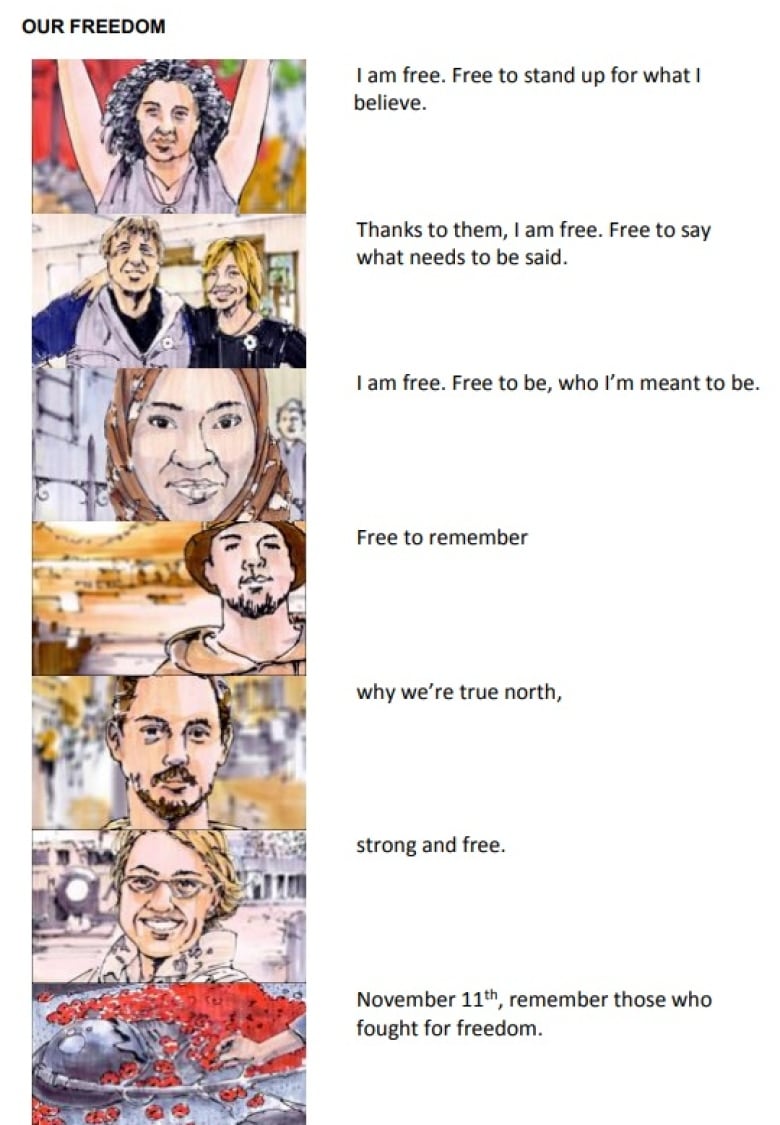 Researchers felt this ad was the one most likely to increase involvement in Remembrance Day activities.

"The message was perceived to be positive and uplifting. While Remembrance Day is in some ways a sad day, the message of this ad concept was also that it should be a day on which Canadians are not only thankful but also celebrate the choices and privileges we have," notes the report.
However, Sage noted one major fault with the concept: the test audience didn't get that the ad was about veterans and Remembrance Day.

"A main issue with the ad was that on first viewing, the purpose of the ad was unclear," they said.

A spokesperson for the department said the testing results are still being considered and the ads will be produced over the coming weeks.

"The 2018 Remembrance campaign will help to raise the profile of the brave men and women in uniform who have served Canada," said Emily Gauthier in an email.

Eight focus groups of about eight to nine respondents reviewed the ads in March of this year in Halifax, Toronto, Montreal and Calgary. The groups were split by age, with an 18-34 group and a 35-and-over group. Participants were paid $100 for their efforts.

'I am free  to say ....' except .... this, that and this (because it will 'offend').
Nice inclusion of The Gropers's special group representation.

Yea no confusion in the 3rd ad, 2nd panel of two people wearing a WHITE POPPY!!!

Half the people did not know John McCrae's In Flanders Field? Well that is not Veterans Affairs fault it's the damn education system in Canada....TEACH THEM OUR HISTORY!

I agree with your statement Edgefore but if I could add to your comment...the Libs beat Equitas in court saying there is no sacred obligation but this will not stop the Libs to give the "impression" there is a sacred obligation.....defined by the Libs.

Our schools, from the public system, all the way up to university are hotbeds of social engineering and social justice. Freedom of speech is dead, and if it isn't sugar coated and everyone gets a participation ribbon, it isn't taught.

Then come all the folks out there who complain how hard life is, with two vehicles in the driveway, a pair of sleds in the garage, a boat, pool and so on. All the while they watch hockey and jam hot-dogs in to their faces, while the kids fight over the Xbox.

Then come the folks who are actually hard up. Working two jobs just to pay the rent, their kids get teased at school because they haven't got the latest icrap phone and designer jeans with one leg tore half off.

Then come the politicians, who are only worried about maintaining their lifestyles at the expense of the public trough. All of them chameleons, changing stripes and colors to suit whatever the atmosphere or audience.

Then comes the military, serving members and veterans alike. Turn in part of your kit boys and girls, we haven't got enough to go around, you'll get it back after someone else has sweat their asses off in it or crawled into it soak and wet. BANG BANG yells the soldier like an ass, because their isn't enough live ammo to go around.

Our military would ride into battle on riding lawnmowers if that is what we were supplied with. And our government knows it.

Then comes the veterans, the silent majority, who have done and would do it all over again if need be. Out of humility the veteran remains quiet for the most part. Only speaking up when the frustration grows to be to much. Only to be told veterans ask to much of their country.

But for once a year, with all the chatter of social media, the theater of politics and chocolate covered sundaes, it's no wonder people have no idea why....

In Flanders fields the poppies blow
Between the crosses, row on row,
That mark our place; and in the sky
The larks, still bravely singing, fly
Scarce heard amid the guns below.

We are the Dead. Short days ago
We lived, felt dawn, saw sunset glow,
Loved and were loved, and now we lie,
In Flanders fields.

Take up our quarrel with the foe:
To you from failing hands we throw
The torch; be yours to hold it high.
If ye break faith with us who die
We shall not sleep, though poppies grow
In Flanders fields.

I forgot a key point earlier.

Our military would ride into battle on riding lawnmowers if that is what we were supplied with. And our government knows it.

What's the matter the bureaucrats can't figure this one out?

Remembrance day should be left the way it's always been. Forget about the ads because it's not the ads that count, it's the respect people give on Nov 11 towards the fallen. We should not have to educate people of this Country beyond what is taught in school. Our own government treats it's forces, and Veterans like they are disposable numbers, they use remembrance day as a tool for their own agenda. The Country is so mixed up on what to think because of what garbage the government puts out there. You got the Legion who's top would not provide accountability for luxury paid vacations for some of it's members, funds that comes from the poppy funds to pay for these types of trips. What's the people suppose to think when they see the poppy box around remembrance day given this type of news?

The government loves to be in the spot light around remembrance day to show that they supposedly care. With regards to Veterans well they can't please everyone, and they say there's always more to do. They also say that only a few are unhappy with the way they treat Veterans. We all know that's a bunch of horseshyte but it's not us who are a shame of ourselves, we served our Country. They're the ones who have to live with themselves for the shame they have far after their political days are over. So let us never forget where the governments positions were, and continue to be towards how they truly treat their Veterans.

Flags of Remembrance to be unfurled Saturday to honour veterans 128 Flags of Remembrance now flying in Sylvan Lake until Nov. 12

What did your relatives do while serving in The World Wars? 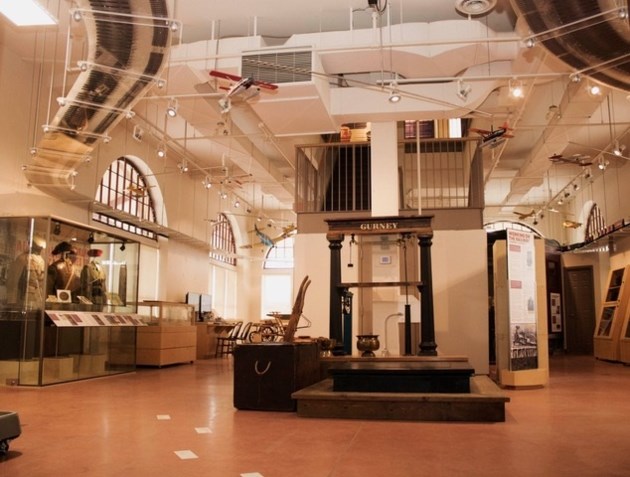