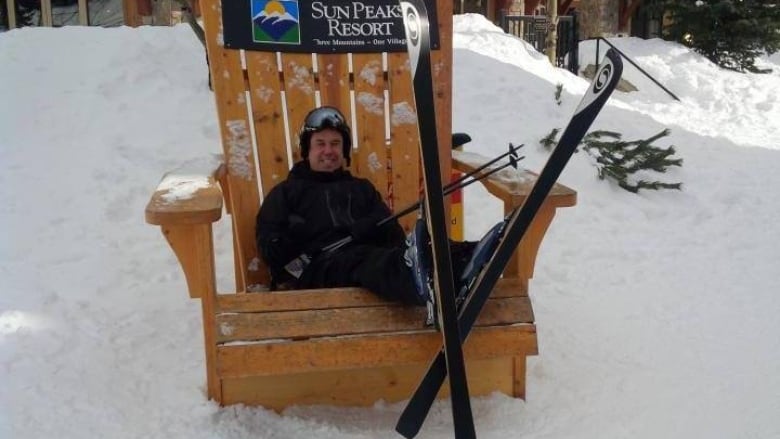 A very-much-alive Truman Tremblay during a recent skiing holiday. "The letter didn't specify when or how I died." (CBC News)

It was a surreal moment for Truman Tremblay.

On March 23, the former RCMP officer and military reservist — who lives with post-traumatic stress disorder — had just arrived home in Kamloops, B.C. from a spring break vacation. In his mailbox he found an official-looking letter addressed to his wife.

Moments later, his speechless wife Allison showed him the letter — expressing Veterans Affairs Canada's sympathies regarding the death of her husband and offering to help out the newly-bereaved widow.

"My initial thought was, 'Wow! My God, how in the hell did such an error happened?'" Tremblay, 48, told CBC News.

"The letter didn't specify when or how I died. It just said that they wanted to send their condolences and that if she needed any assistance to contact them, and also to contact the Last Post Fund for burial benefits and things of that nature, and it was signed by a veteran's service agent."

Now a federal parole officer, he served in the RCMP for four years in B.C. in the late 1990s and developed PTSD after witnessing gruesome accident scenes. He was formally diagnosed in 2012 and is still receiving treatment.

What frustrates Tremblay about the letter, he said, is the seeming indifference he's faced while trying to find out how and why it happened, and what Veterans Affairs is doing to make sure similar mistakes don't happen to veterans who may be in more fragile psychological conditions.

He said he's spoken with three different people at Veterans Affairs, including a staffer in the deputy minister's office.

The department has launched an investigation but Tremblay said the only thing he's been told so far is the obvious — that the letter was sent in error and the department is sorry. He's also been told that the mistake happened when a case manager transferred his file.

The department did write a letter of apology and posted it to Tremblay's online Veterans Affairs account.

Tremblay said that what bothers him most is the fact that no one at the department tried to confirm that he was actually dead. He said he wonders whether the error represents a systemic problem.

He also wants to see someone held accountable for the emotional upset — which is what would happen, he said, if someone in his parole office made a similar mistake.

"I know that if someone was to make an error and change an offender status from living to deceased, they would likely have their employment terminated," said Tremblay.

"So I could just not imagine how someone made such an error. It just arrived and there were no phone calls. No one calls to check on me and see if such a thing even occurred in the first place."

A spokesperson for Veterans Affairs said the department is still investigating and has tried to make amends.

"Veterans Affairs Canada is deeply sorry for this mistake," said France Bureau, the department's director of public affairs. "As soon as we became aware of the mistake, we reached out and a letter of apology has been sent. As in all circumstances when errors happen, immediate action has been taken to review the issue and avoid future mistakes."

She said there is protocol in place to verify reports that a veteran has passed away, but in this circumstance there was "human error."