Newfoundland veteran works to give back

Newfoundland veteran works to give back

In the midst of a personal health battle, Newfoundland veteran works to give back

Veteran Tom Anderson is hoping to raise $15,000 to fund a trained service dog that would be donated to a fellow vet struggling with post-traumatic stress disorder (PTSD). - Rosalyn Roy

CHANNEL-PORT AUX BASQUES, N.L. — The only hint of scars Tom Anderson bears from his military become evident when you look him square in the face. Even then, it’s not the first thing you notice.
The pupil of his right eye appears unfocused. But it’s his cheerful expression – a big friendly smile partially concealed beneath a shaggy, salt-and-pepper beard – that best belies any suggestion of a disability.

Anderson is a double amputee and has undergone a cornea transplant. He was on his second tour in Croatia in April 1994, serving with Princess Patricia’s Canadian Light Infantry, when he drove over a landmine.

As well as the damage to his cornea, he suffered an open fracture to his left hand and had both legs amputated below the knee.

As a young boy, Anderson dreamed of joining the military.

“It was always my passion,” he says. “I’ve got some family members that’s serving, yeah, and I was always intrigued with the military, the way the military does things.”

Like a lot of Newfoundlanders, Anderson is an avid outdoorsman, accustomed to handling firearms, hunting, and developing practically every conceivable wilderness skill. Enlisting in the military immediately after high school seemed a natural fit.

“I always wanted to serve my country.”

That service ended with the landmine. Eventually he was discharged for medical reasons.

He was not yet 21 when he was wounded. Anderson laughs when he says his injuries have only slowed him down a little bit. He still moose hunts, goes snowmobiling, and spends as much time outdoors as he ever did.

“I’ve got a disability but for every disability there’s always the ability to do better,” he says stoically. “That’s my motto.”

And as if life hasn’t thrown enough his way already, now Anderson is facing another battle –rectal cancer.

That positive, determined attitude has served Anderson well on this battleground, too. He has only two treatments left and will undergo another surgery in June, but says he’s responding well and that his doctors are quite optimistic.

“My prognosis is good. I guess, you know, they caught it in time.”

Anderson takes a moment to compare the injuries he sustained with receiving his initial cancer diagnosis.

“With my accident I knew that I was able to walk again, and I was going to overcome it pretty good, but when the doctor diagnosed me with cancer, it was a different ballpark altogether,” admits Anderson. “It is what it is.”

The diagnosis was hard on his family, particularly his sons who are 15 and 17.

“The hardest thing I had to do was tell my boys that you know, ‘Your father got cancer.’ Hardest thing I’ve ever done in my life.”

It was during his treatments that Anderson first started letting his salt-and-pepper beard grow long and shaggy.

A friend suggested he fundraise to shave it off for cancer, but after giving it some thought Anderson decided on a different cause.

“Even though I’ve just done treatments for cancer and the Cancer Bliss Centre (Dr. H. Bliss Murphy Cancer Care Foundation) down in St. John’s was more than good to me, I always donate to cancer,” explains Anderson.

“I come from a military background and something that I hold close to my heart is the Royal Canadian Legion organization and the Wounded Warriors campaign, so I decided to shave my beard off to raise some money to get a service dog for some veteran that is in dire need.”

To fully fund a post-traumatic stress disorder (PTSD) service dog for a veteran, Anderson hopes to raise $15,000. He also hopes his efforts will raise awareness for veterans suffering from PTSD. While he is not on the list for a service dog, he understands how crucial they can be for a veteran combating PTSD, something he’s witnessed firsthand.

“I know a lot of guys, friends of mine, that suffer from PTSD, some that have service dogs and some that don’t have no service dogs,” he admits.

He believes the waiting list is likely long, and knows that for many veterans, getting a trained service dog can be cost prohibitive.

Helping Anderson with his fundraising effort is Port aux Basques Branch 11 of the Royal Canadian Legion.

Anderson says President Pam Osmond came on board immediately to help his campaign. Together they set up a Facebook fundraiser page for online donations.

“He’s a hero,” insists Osmond. “I consider him a hero for everything he has accomplished and can still find the strength and determination to help another veteran. To me this is a true hero, having the ability to help another.”

Others have also volunteered to help, and Osmond says there will be some additional fundraisers leading up to July 1 when Anderson shaves off the beard. Canada Day is also coincidentally Anderson’s birthday.

Osmond is still working on preparations for the big day, but promises there will definitely be cake. She’s also hoping to entice some local musicians to step forward to provide entertainment.

“The planning stages are still going on, but we are hoping for a few surprises that day as well. We will definitely be going live on Facebook for the event.”

Despite all he’s been through and all he’s witnessed, Anderson says he has absolutely no regrets about enlisting.

He says the military is still his life and credits it with preparing him mentally and physically to meet serious challenges.

“I can’t turn back the clock. I mean, if I was bitter about the accident I had years ago, I mean I probably would still be up in that hospital bed in Ottawa. But I mean life still goes on so you gotta make the best of it,” says Anderson.

Anyone wishing to volunteer is encouraged to contact Pam Osmond at the Port aux Basques branch of the Royal Canadian Legion or on Facebook.

After losing his legs to a landmine and battling cancer, this vet's mission: raise money for another vet 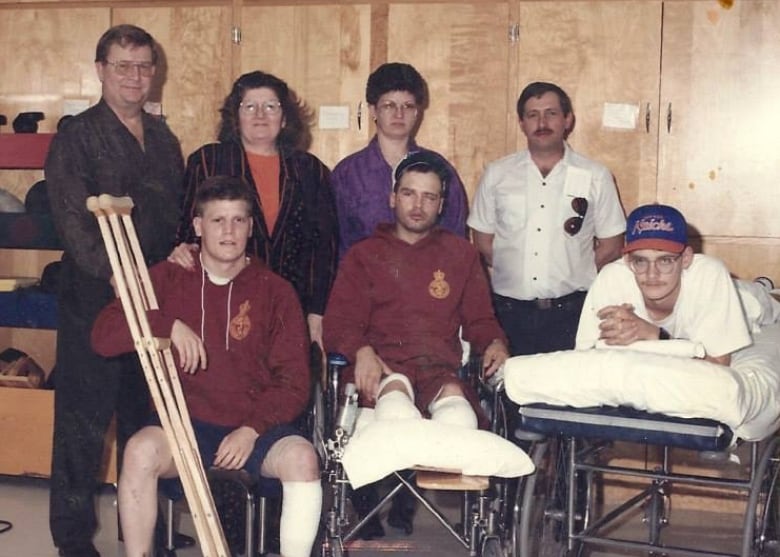 Tommy Anderson (centre) lost his legs below the knee in a landmine explosion in Croatia. He recuperated at the National Defence Medical Centre in Ottawa.