Plaques now on display at Bathurst legion for safekeeping 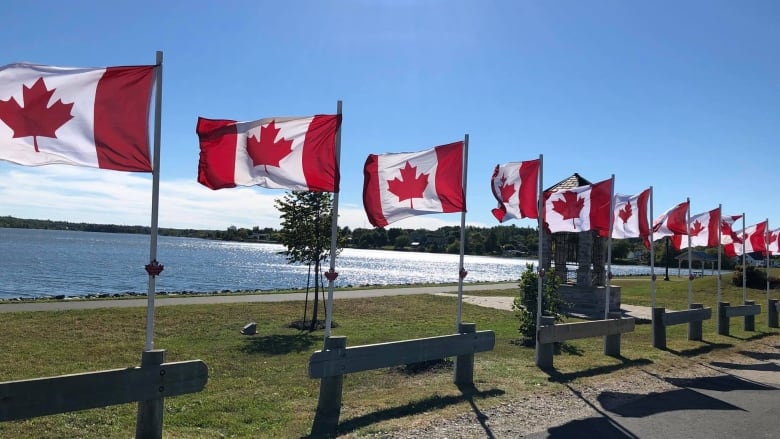 Less than a day after flags were raised along the causeway in Bathurst to honour dead or missing soldiers and more than 70 plaques honouring veterans were revealed, four of the small Maple Leaf plaques and a flag disappeared.

After another plaque almost vanished, Jordan Chiasson, the New Brunswick representative on the Veterans Voices of Canada — Flags of Remembrance, said the plaques were moved to the nearby Royal Canadian Legion branch for safekeeping.

"It's extremely disheartening," he said. "Especially with all the work, it's just disheartening that someone would just go and deface something that's not affecting them in any way."

Chiasson said the organization has been holding the ceremony for the last two years in different locations across Canada. This was the first time it was being held in Bathurst, his hometown.

"I dreamed of doing this on the causeway ever since I heard of the idea."

Guardians of the flags

The 128 Canadian flags represent the 128,000 Canadians who have died or been missing since the Boer War, which ended in 1902. Each flag represents 1,000 men and women.

"On top of that, families and businesses, anybody can sponsor individual plaques to be hung on the poles. They are usually named to a veteran they know or to a relative.

"They act as the guardians of the flags." 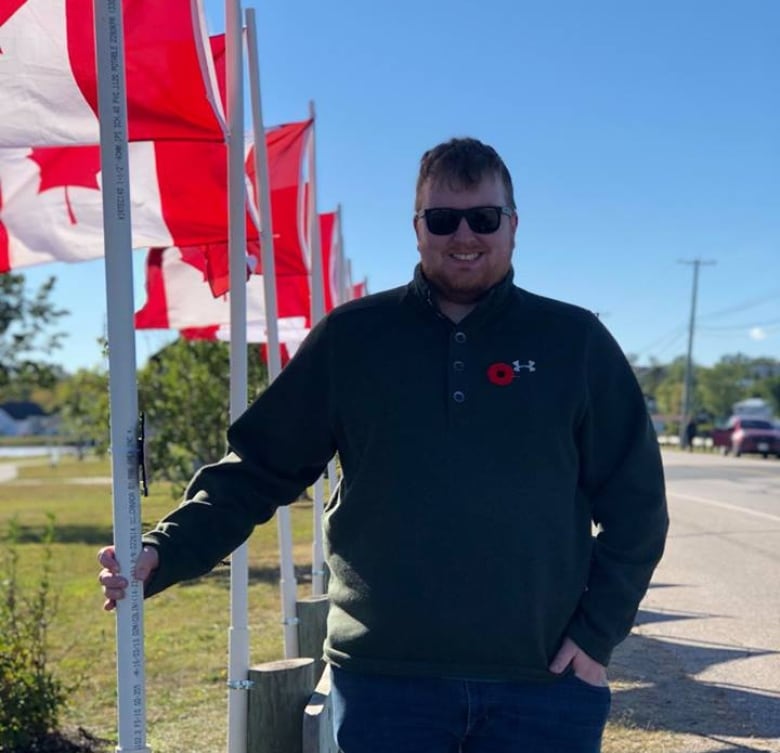 Jordan Chiasson, one of the organizers of the flag display in Bathurst, says he was disheartened to hear four of the plaques were stolen. (Veterans Voices of Canada - Flags of Remembrance/Facebook)

​Chiasson said the plaques are supposed to remain with the flags until the closing ceremony on Nov. 25 but that has changed.
"Unfortunately, waking up Sunday morning I got a call stating four plaques were missing."

Chiasson and others walked around the area, searching for the plaques, but could find nothing.

Then early Monday, Chiasson got a message that someone had been chased from the flag line after allegedly trying to take a plaque.

"Then this morning I got another Facebook message stating that a flag was missing, and there were cut zip ties on the ground."

Now all the remaining plaques have been moved to Branch 18 of the legion for safekeeping until the closing ceremony and are on display there.

Chiasson said the plaques have no scrap value.

"They're just destroying it to destroy it."

The group is trying to find a way to display the names of the sponsors with the flags, which Chiasson said will remain in place. 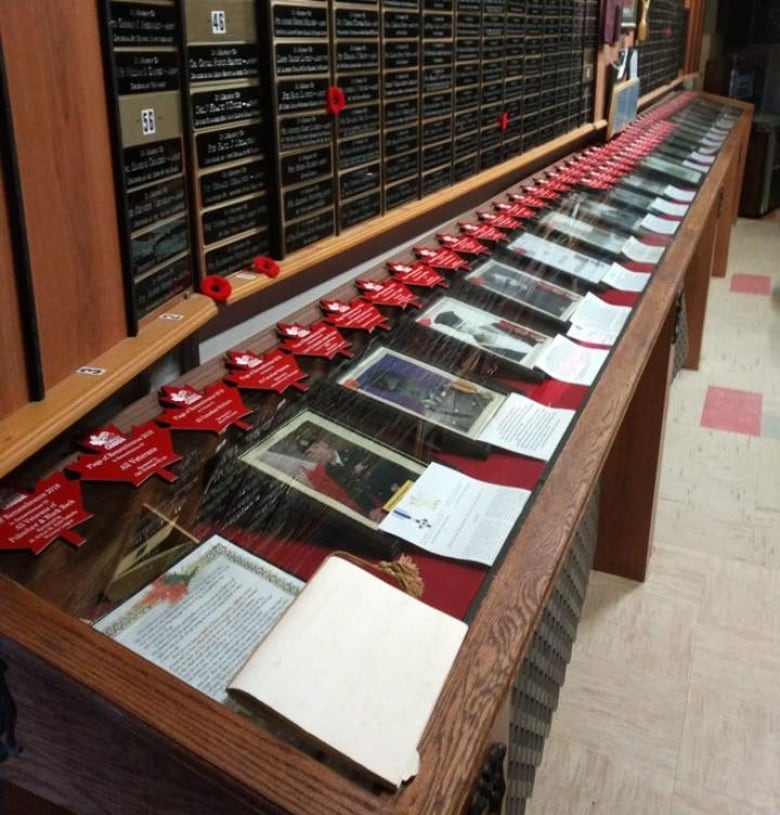 "We do anticipate some vandalism but not to this extent, so we weren't prepared to have to remove the plaques and to come up with another idea of how to honour the sponsor holders."

The flags and plaques will be given to the sponsoring people and businesses at the closing ceremony.

Although discouraged, Chiasson said the event will be back in Bathurst next year and he hopes it continues to grow based on the feedback he's received.

"It has a beautiful spot on the causeway and when you drive by and you think each flag represents 1,000 people … it really puts it into perspective the amount of sacrifice for our freedom that has happened over the last 100 years."

Lot of crime in that area lately.

It takes a special kind of low-life to deface or thieve from a memorial to veterans.

It really is a shame when the gesture of honouring fallen soldiers is disrespected. And still worse, the disrespect shown to those who didn't come home.

Incidents like this have been on the increase over the years. Unfortunately the thefts and vandalism are tough to combat.

I'd like to see a national organization created where volunteers can access a database of memorial sites, permanent and temporary. Volunteers could sign up to guard these sites. New sites are particularly vulnerable, because people are not used to them.

Volunteers would have to work in pairs at a minimum for safety, obviously unarmed, with exception of a whistle, flashlight and mobile phone.