Remembrance Day is this weekend, a time when thoughts turn to Canada’s soldiers and the sacrifices they’ve made for their country. Politicians always make a show of honouring those sacrifices, by wearing poppies, organizing events and giving public speeches about the important role the military has served in protecting our democracy. (Justin Trudeau is even headed to France this weekend to mark a century since the end of the First World War.)

But when it comes to providing for those soldiers when they come home...that’s where things get more complicated.

No matter what party is in power, the federal government is accused of not doing enough. That’s not always without reason: Veterans Affairs Minister Seamus O’Regan revealed yesterday that Ottawa had accidentally shortchanged veterans some $165-million over seven years due to a calculation error, and the minister pledges they’ll pay the money back over the next couple of years.

There’s also the money the government isn’t spending: The New Democrats dominated debate in the House of Commons on Monday by pointing out the millions of dollars that are budgeted but not spent by Veterans Affairs every year, something that’s occurred when both Liberals and Conservatives were in power.

And Globe and Mail reporter Gloria Galloway has dug out yet another issue related to veterans in today’s Globe and Mail: The Liberal government’s planned “pensions for life," which, it turns out, are actually cheaper for federal coffers than the former system of lump-sum payments. The government has said for the past year that the new pension plan represents an extra $3.6-billion going to veterans, but that appears to be a case of optimistic long-term accounting. Most likely, former soldiers wouldn’t see the extra funds for years, if at all. “This is a cost-savings venture for these guys,” veterans advocate Sean Bruyea said.

Know your rights: More on bosses breaking the law on Remembrance Day (updated)

What's special about this Remembrance Day? Most Canadians don't know 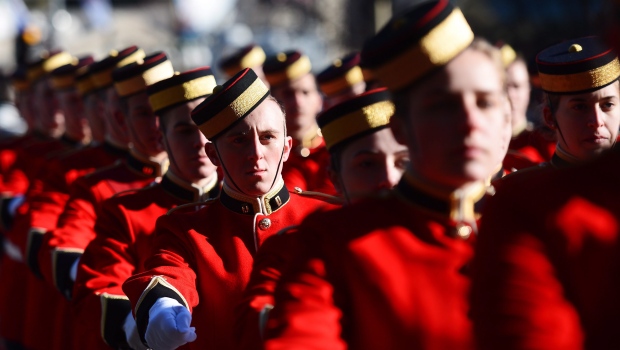 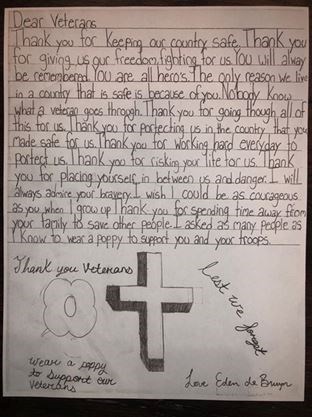 EDITOR’S NOTE: Grade 4 student Eden de Bruyn wrote this letter and created this portrait ahead of Remembrance Day. The nine-year-old Dufferin County girl wants to show them to as many veterans and Canadian Armed Forces personnel as possible.

Thank you for keeping our country safe. Thank you for giving us our freedom, fighting for us. You will always be remembered. You are all heroes.

The only reason we live in a country that is safe is because of you. Nobody knows what a veteran goes through. Thank you for going through all of this for us.

Thank you for placing yourself in between us and danger. I will always admire your bravery. I wish I could be as courageous as you when I grow up.

Thank you for spending time away from your family to save other people. I have asked as many people as I know to wear a poppy to support you and your troops.

Thank you Veterans. Lest We Forget. War artifacts on display ahead of Remembrance Day

Observing Remembrance Day all year round

Being a Canadian soldier was Jack Bould’s childhood dream

On Remembrance Day, remember the families

ADAM CHAPNICK
CONTRIBUTED TO THE GLOBE AND MAIL
PUBLISHED NOV 09, 2018

Adam Chapnick is the deputy director of education at the Canadian Forces College.

This November marks my 13th Remembrance Day as a professor of defence studies at the Canadian Forces College in Toronto.

It also marks a significant evolution in the way that I understand what it means to remember.

As a civilian who joined the college without any previous military background, I have learned a lot about military culture over the last 13 years, and particularly about the overwhelming idealism that is necessary to assume a job that requires you to put yourself in a position of unlimited liability on a daily basis. I now understand viscerally why Canadians who see members of their armed forces on the street, or at Tim Hortons, are prone to thank them for their service (or buy them a coffee).

Even if we don’t always agree with our government’s decisions when it comes to defence and foreign policy, most of us are proud of the individuals who make up our military, and awed by the sacrifices they make in support of their country. We care just as deeply for our veterans, too many of whom still struggle upon their release.

But I’ve also learned that when we say, “thank you for your service” to a veteran, an officer or a non-commissioned member, we aren’t quite getting it right. Because when members of the Canadian Armed Forces deploy, they aren’t the only ones putting service before self. Their families are, too.

I guess I had always understood this distinction in theory, but it was only this past year that I came to fully grasp its implications. Last spring, I asked my students about the sacrifices that their families had made to support their careers. They responded, unanimously, that their parents, spouses, partners and children had it much harder than they did, especially whenever they were abroad.

One officer was deployed to Afghanistan just after her son turned five. When the little boy’s teacher asked him what it was like not to have his mother around for an extended period, he answered, “It was hard. All that time, I didn’t know if she was going to come home.”

Living with such fear can be unbearable, especially for a young child, yet it’s a normal part of life for military families (not to mention for their close friends).

Another highly decorated officer recalled his nine-year-old daughter’s experience while he was in Kandahar. “She was just old enough to fully get what was happening every time a fallen soldier was repatriated,” he said. “That stressful experience left deep emotional scars. She should be the one wearing a medal.”

These stories don’t always end well. Families break up. Children act out in school. Lives are constantly uprooted. Parents are scared to check their phones or watch the news. Partners and spouses cover for loved ones who miss one milestone after the next. Those who stay behind experience pain that is just as real as that which is felt by those serving far away.

Remembrance Day asks us to recall the sacrifices that military members have made for our country during the World Wars and other violent conflicts. We wear poppies to honour those who gave up their lives or came back no longer the same. At 11 o’clock, we stop what we are doing and observe a moment of silence to be thankful for the freedoms they defended, and continue to defend.

Rarely, however, it seems to me, do we take the time to think about the difficulties that military families face daily?

This Remembrance Day, if you happen to see a member of the Canadian Armed Forces, rather than just thanking them for their service, please offer your best wishes to their families as well.

The most important lesson that I have taken away from my time at the Canadian Forces College is that no one goes to war alone. 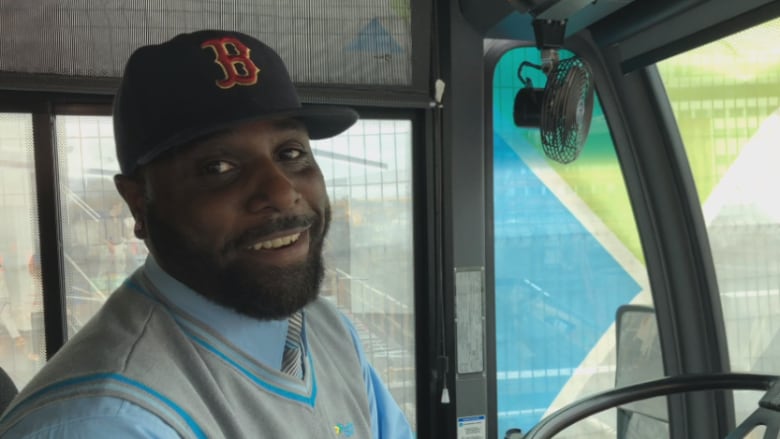 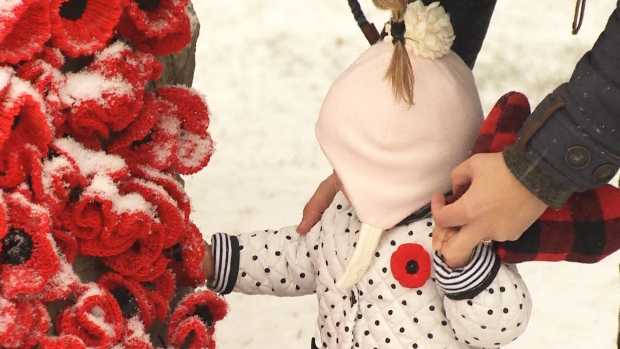 Keeping Their Memory Alive: Letters for those with connection to veterans